Here is an update from AFL about respective state leagues

Why have they allowed the AFL players to play against AFL clubs but bannwd them from state comps ? Is that a sign that they do not want any state league football to be played ?

This is not a surprise something I heard about this a few weeks ago. Which why the original 5 vfl standalone clubs now 8 are meeting regularly

The AFL are so precious and arrogant they are all about themselves.
The six main local leagues are have meetings today with the AFL and want their season to start.
They should go alone if the AFL advise them not to. Who does McLaughlin think he is ? A health adviser ??

What happens if some of the AFL clubs get a spate of injuries ? Bring underdone players on a shortened list with no games under their belts ?? They also likely be forced to cram in many games over a short period. Watching Round 1 on TV with no crowd looked crap. I just hope that the VFL and local leagues get the go ahead even as late as July so I can enjoy watching a game of footy live.

vfa it has ever been thus since the VFL was formed in 1896!Nothing has changed.

Im like you the game without crowds is hardly worth watching.I think you will find as the fake AFL season grinds on interest and ratings will wane.Of course if there is a big second wave of the virus which many people think might happen the comp would stop agian.

The AFL will attempt to organise scratch matches for players who miss selection in their senior team once the season resumes.

The league has ruled no AFL-listed player can take part in second-tier competitions like the VFL, SANFL, WAFL and NEAFL this year.

Barring players from lower-level leagues is just one of the health requirements for the AFL to restart - likely in June - amid the COVID-19 pandemic. 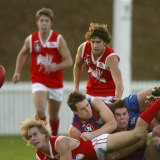 The AFL says it is considering arrangements for games between other clubs in a "controlled environment" but is undecided on the best way to do it.

"... In line with government and AFL protocols, in order to have continuity in game play and improve their possibility for selection," a league statement read.

List sizes vary but some clubs have up to 47 players when you factor in rookies.

If a team has a completely healthy list, that means up to 25-listed players per club could miss out on a game each week.

Scratch matches would allow AFL players to stay match-fit and push their case for selection outside of training.

Eight of the 10 Victorian-based clubs fielded their own VFL reserves teams last year, but some part-time footballers are involved in those sides.

The AFL's other eight teams all have lower-level teams in their name, except for Fremantle whose footballers play with Peel Thunder in the WAFL.

It would be near impossible to safely combine the professional and semi-professional environments and adhere to strict medical protocols.

Port Adelaide chief executive Keith Thomas said he was disappointed the club could not compete in the SANFL in its 150th anniversary year.

"We are a foundation club of the SANFL and proud of this heritage. We look forward to continuing that legacy in the SANFL in 2021," Thomas said.

"It is unfortunate, but it's a necessary measure to protect our people."

When the afl resumes you will get the withdrawl symptoms people will watch out of boredom. After a few weeks people will tune out in droves as watching afl without crowds is boring and lifeless. The spectators make the game. Can easily see the afl season get canned if there is a second wave. I just wish we get some sort of vfl or local footy which will give me something to watch and not test pattern (afl footy with no crowds). Realistically you won't get vfl or local footy until July if it gets the ok. It's great that port, Willy, werribee, coburg and Frankston have rallied and conducting regular meetings. A short 10 round season is better than nothing.

One league that are keen as mustard and ready to go at a drop of the hat is the picola and district football league.

How is the VFL website still not updated?? The last news update was posted on March 16. How can an elite sporting competiton provide such an poor online experience? Even social media accounts have been ignored.

Just remember it is run by AFL now not AFL Victoria