Former North Melbourne coach Brad Scott will become the new head of AFL Victoria as part of an AFL restructure that will see around 20 per cent of roles at headquarters directly affected.

AFL staff were informed of the organisation's new structure on Monday morning, meeting both with their respective managers and being addressed by chief executive Gillon McLachlan. 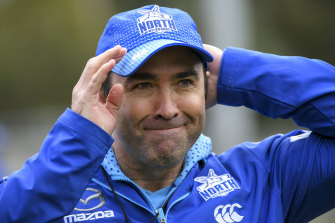 A new structure with eight executive general managers was outlined. Longstanding executive Darren Birch will leave the organisation by year's end, while Ray Gunston will shift to a contractor role.

As part of the restructure, the AFL's state bodies will be integrated into the central organisation.

AFL Tasmania chief Trish Squires will become the new head of AFL Queensland, while former North coach Scott – who joined the league this year in a game innovation role – will head AFL Victoria.

The restructure was announced as part of a cost-cutting process in the wake of COVID-19.

It may well be unrecognisable next year!