Sandringham vs Brisbane at Trevor Barker Oval 11:05am

Sydney vs Collingwood at SCG 11:35am

Werribee can still make the eight with wins over Essendon and Preston. We need at least one of the old vfa teams playing in the finals. They can jump GWS, gold coast if they lose one and Richmond with a slight percentage jump. They need a good start and jump Essendon early to give themselves a chance.

Surely there will be some of the group headed to North Port tomorrow. My young fella and I are headed up there, so if any of you see two blokes looking very conspicuous in our Dolphin scarves, head over and say g'day :)

Someone please explain to me what I just watched today. To dominate a side so greatly that a 40 point half time lead flatters them (we should have been 60 up but for some easy set shot misses), to then shut up shop and play completely reactive football until the last 2 minutes......this is why our football club lacks the RESPECT of other clubs, and why we always have. Can you imagine Port or Willy coughing up a lead like that? Never, just wouldn't happen, because it's in their culture to go for the jugular. At Frankston, we play great footy for awhile and then stop to admire ourselves and pay the price. This season promised so much, and now we will finish below Port which is disgraceful given our respective starts to the season. Finals weren't a must, but to finish this season in the manner we have gives us no platform from which to launch next season. Go have a hard look at yourselves fellas - you have talent, but do you have the discipline and desire?

Well I also went to the Port v Frankston game AJ.. Obviously I thought it was an incredible win and one of our best for some years.

You lamented Frankston playing reactive footy,  and I believe that is what Port did earlier in the season.  Changing mindset to bexome more defensive,  trying to protect a lead,  which of course beings on more pressure.

I thought crowd numbers were probably the best we have had this season,  which I think shows how much more standalone clashes mean to supporters.

The crowd involvement was terrific and sounded more like a finals match.

Frankston flogged us last season and I thought it was going to be the same sort of result.  One game to go and plenty of work to be done by both clubs for 2023. 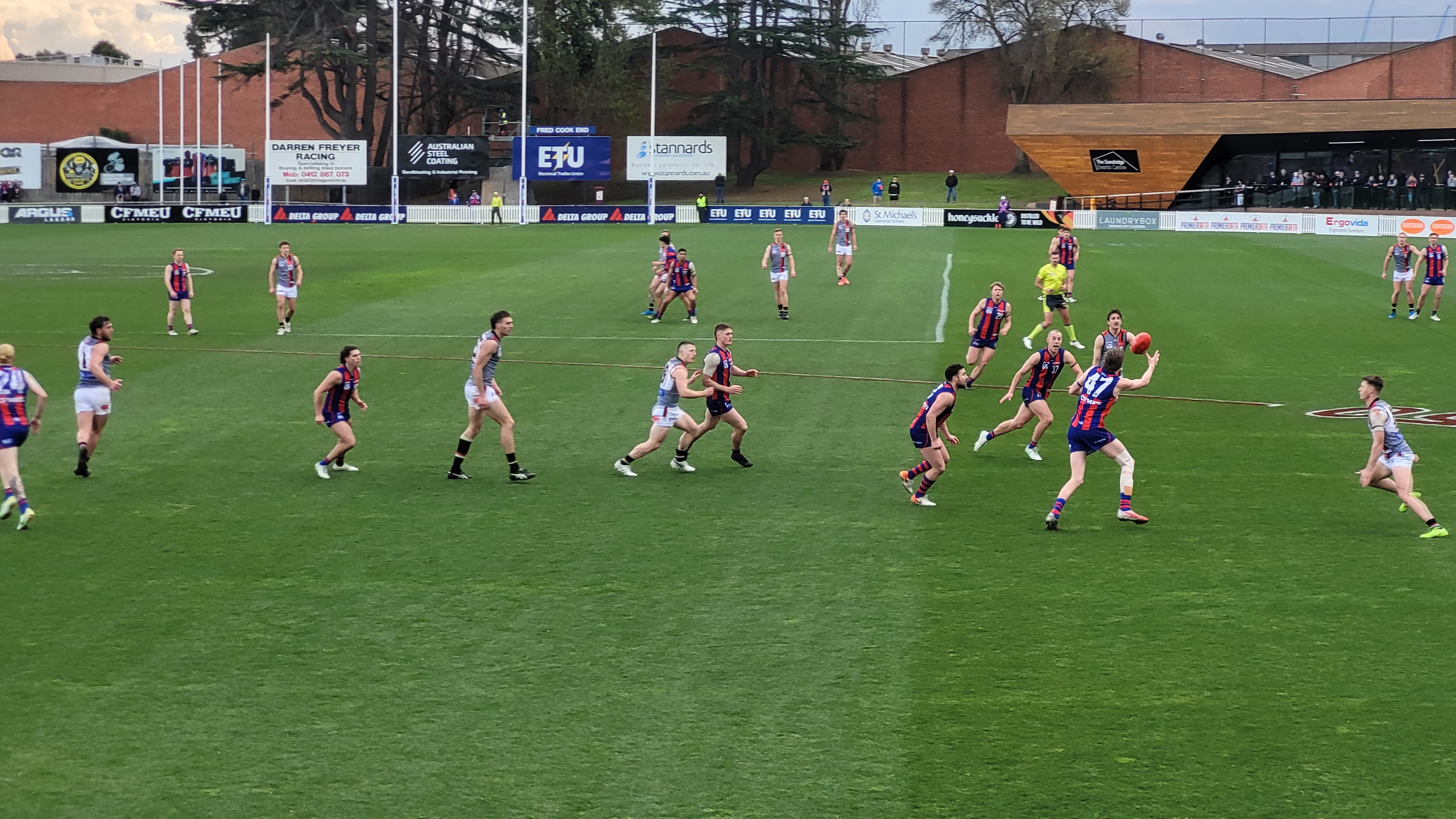 Yep, that stings but congrats to Port for turning it around and producing a superb second half - impressive stuff. Same issues each week for Frankston - fade outs, playing in patches or over use of the footy. Another disappointing year for the Dolphs after some early promise and showing flashes of brilliance at times. Would like to see bit of a clean out for next year - we have 6 or 7 who are ok playersand play each week but dont deliver consistently, and are probably never going to be good enough to take the team to the next level.

Hopefully the coaches can come up with a game style that is more suitable for this team. We are just not skilled enough to play the short game - chipping it around, keeping possesion etc. Coburg showed us how it should be done, one or two handballs then a long kick to a moving target. According to Campbell Brown on Channel 7's telecast last week, Frankston have to worst disposal efficiency rating in the league, so its not hard to see why their game breaks down so easily.

Agree with North Port, plenty needs to be done for next year.

I'm gonna name names......no personal attacks here - some people have come into the side and made it better. Liam Reidy particularly has given us real competitiveness in the ruck and drifting forward is a constant threat - good kick of the ball to go with it. McLaughlin and O'Leary provide a terrific basis to build a forward structure around. I feel Kai Owens has finally found his spot as a forward flanker type. Mynott has been a real ball magnet, and both of the Riley boys show the poise required to play anywhere from back to forward flank.

That said.....Liam Hiscock - just way too many careless clangers to be an integral part of a defence. Sam Fletcher - in and out, good when we're running the ball but little defensive effort. Austin Bradtke - nowhere near the football nous required for this level.....wouldn't be a dominant tall in the MPNFL if he went back there. Taine Barlow - the king of turnovers and easy misses. Josh Begley - while he often presents a strong body in a contest, he makes very few second efforts and simply does not chase.

Happy to hear others thoughts on our list. I do still think we've come a long way (obviously, we had no team and no club just a couple of years back), but we need to continue moving forward and play with a professional mindset - because nothing less will cut it in this league.

One last comment about yesterday at Port. Not sure what the free kick count was, as it's not shown on the VFL app, but gee there seemed to be some different interpretations of certain rules depending on whether it was going for the home or away team. It was particularly galling to have that "high tackle" against Jackson Voss paid at the finish when I saw much worse than that ignored frequently at our end. Signorello also seemed to deliberately slide into the tackle as well, which is no different to diving.  Anastasio's throw out of the pack to Cody Szust for the go-ahead goal was interesting too. Combined with the injuries to undoubtedly our two best footballers - Fordham and Newman, we were definitely up against it at the finish. Not that we should ever have allowed ourselves to be in that position. 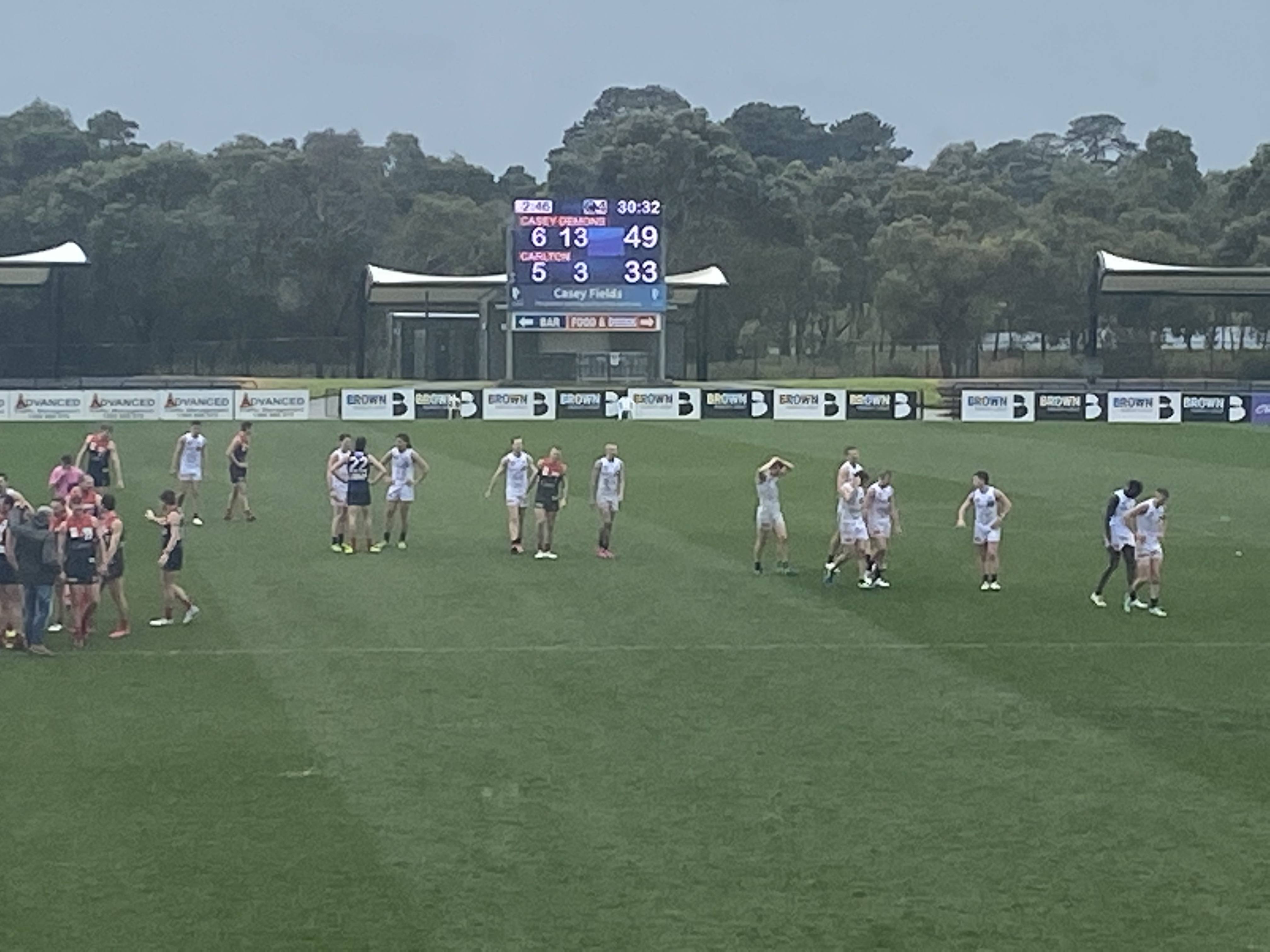 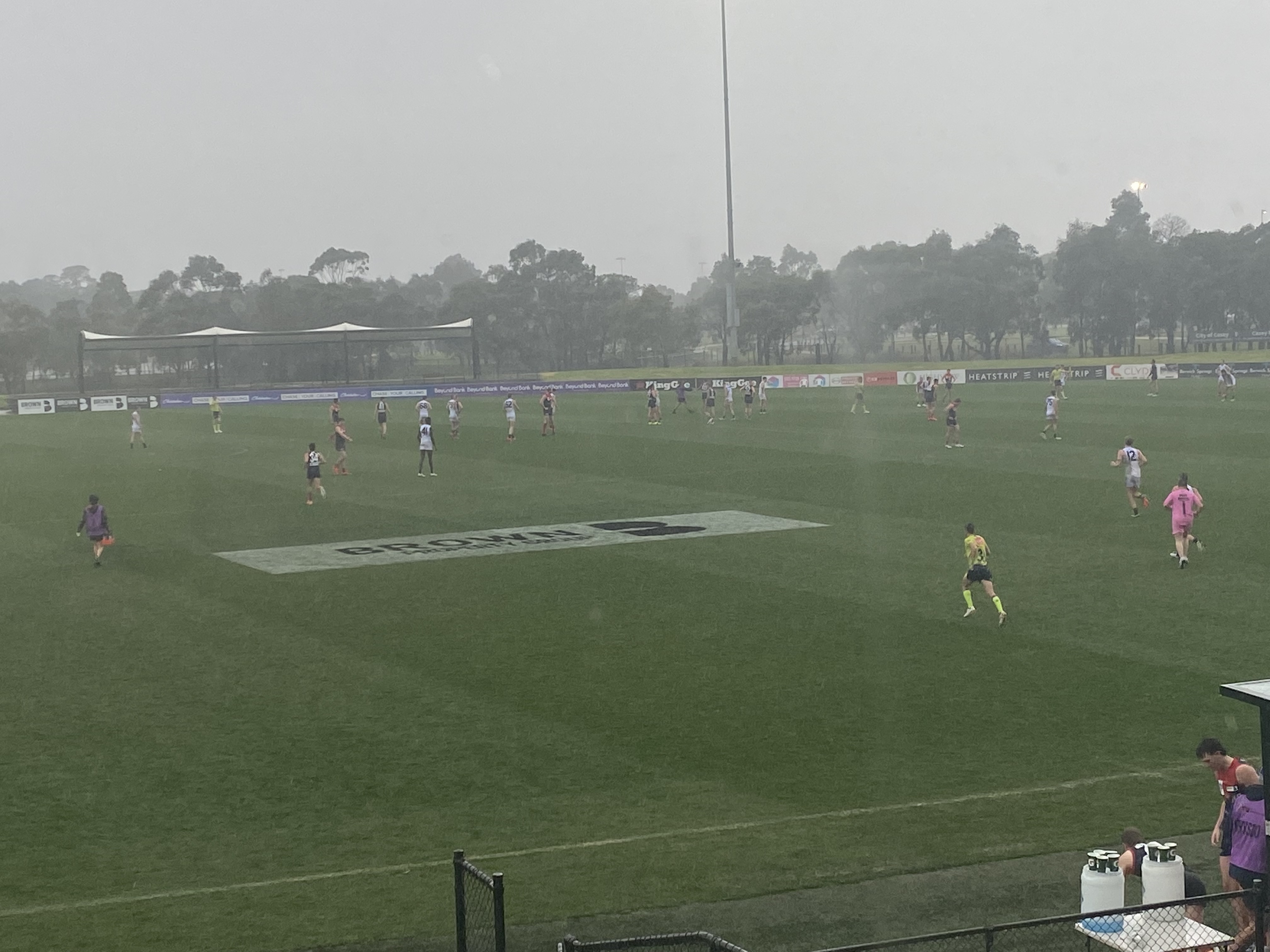 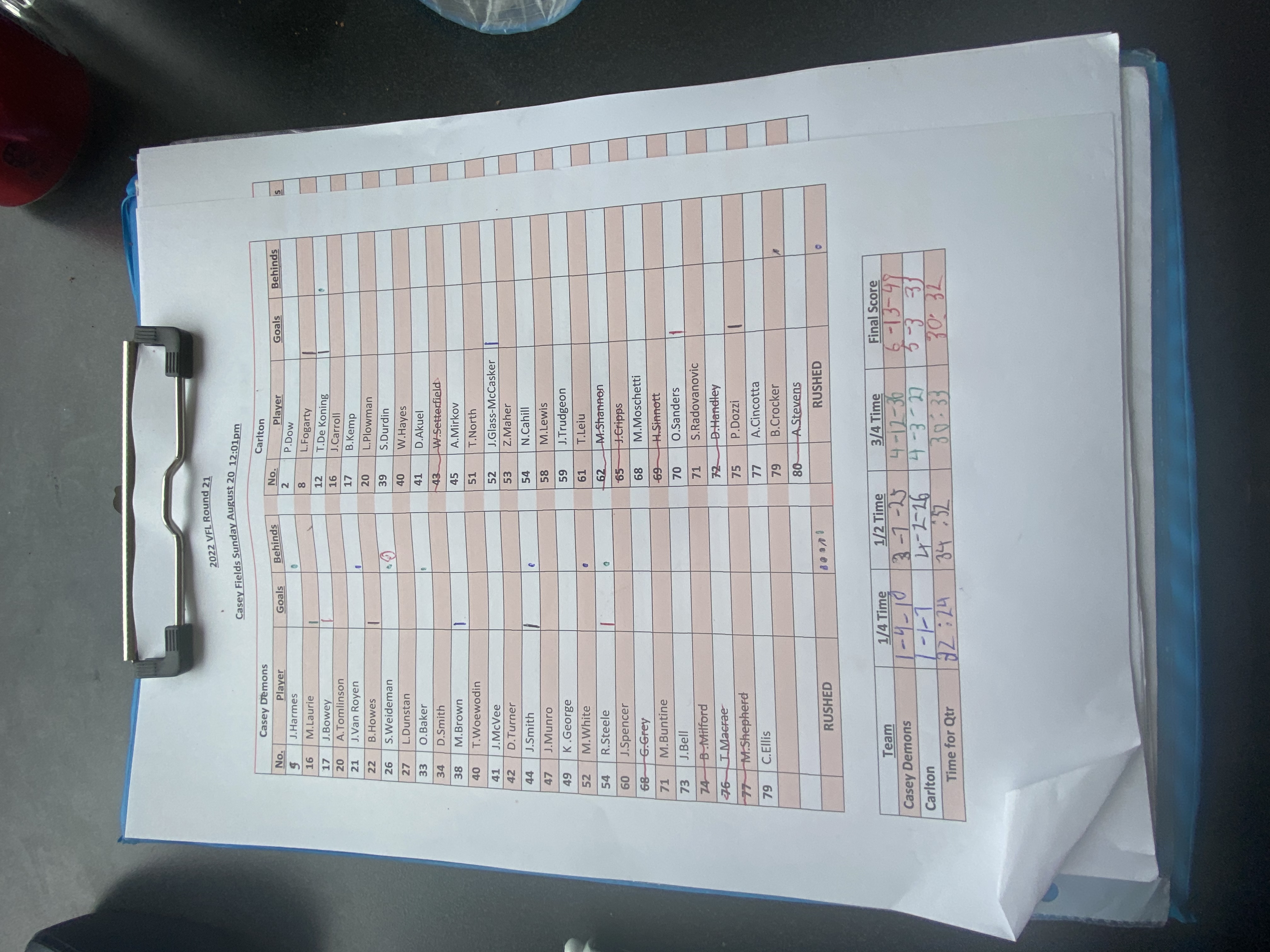 I'm gonna name names......no personal attacks here - some people have come into the side and made it better. Liam Reidy particularly has given us real competitiveness in the ruck and drifting forward is a constant threat - good kick of the ball to go with it. McLaughlin and O'Leary provide a terrific basis to build a forward structure around. I feel Kai Owens has finally found his spot as a for

Aj one thing that is certain as day turns to night NOBODY gets more free kicks than Port at Port.

The umpires sleep in the grandstand down there. CHECK IT OUT !

Free Differential Stats after Round 21